Home > On Location in Beautiful Tahoe 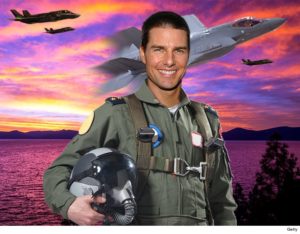 Tom Cruise is currently on location in beautiful Tahoe (South Shore) filming “Top Gun: Maverick.” Paramount’s been keeping specifics of the sequel under wraps, but we are sure he won’t disappoint.

We’re told Tom’s shooting scenes running through the forest. And WOW! that man can RUN! He’s also shot some dialogue in beautiful Tahoe’s mountains … and looking down at our charming local airport.

Cruise has already shot scenes in San Diego and Nevada, but the production in Tahoe is “way more intense — with cameras suspended between trees to capture Tom booking it through the woods, and lots of military aircraft are landing at Lake Tahoe Airport for the shoot”, according to TMZ.

Of course, Maverick doesn’t have Goose as his wingman this time around. We’re told he’s making do with some “physically fit” extras with military backgrounds. We thought they would ask Tim, but he is pretty busy these days!

"My wife and I spent a day or two touring South Lake Tahoe with Tim many years ago. We were not ready to buy, but we were so impressed with his knowledge,... continued"
- Steve Sorensen
View All