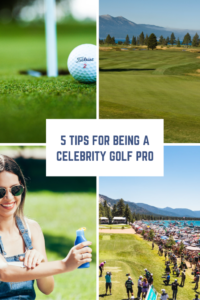 The American Century Championship kicks off its 33rd year at Edgewood Tahoe Golf Course July 6-10, 2022. This celebrity golf tournament brings more than 80 sports and entertainment celebrities to Lake Tahoe. Returning this year, fresh off his fourth NBA championship win, and first NBA finals MVP win is Steph Curry of the Golden State Warriors, along with Justin Timberlake, Charles Barkley, Aaron Rodgers, and Tony Romo. Watching these GOATS play the Edgewood course is a highlight of the summer. Here’s the ins and outs of experiencing this iconic Tahoe event.

Sunscreen and hydrate. Tahoe’s altitude makes it easier to end up with a sunburn so bring a hat and apply sunscreen frequently. You are allowed to bring one 16-ounce water bottle on the course. You’ll need it.

"With all of the stress that comes with the purchase of a new home, it was a relief to have Tim and Kristi on our side. I really appreciated how responsive... continued"
- Matt and Sara Fluty
View All