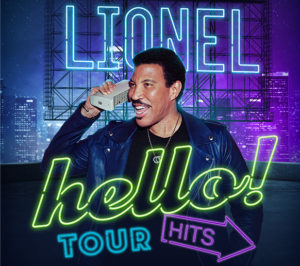 Classic crooner and popular music superstar Lionel Richie brings his extensive catalog of hit songs to beautiful Tahoe. The venerable vocalist had multiple hits with the Commodores and many more as a solo artist. Richie’s hits include, “Lady,” “All Night Long,” “Dancing on the Ceiling,” “Hello,” “Brick House” and “Three Times A Lady.”

Richie was a judge on ABC’s American Idol this past season and has returned to the ‘Judge’s’ chair for the 2019 season. He launched his Las Vegas headlining residency show, Lionel Richie—All The Hits, at The Zappos Theater at Planet Hollywood Resort & Casino in April 2016. In an unforgettable evening featuring his brightest and best anthems which have defined the music icon’s unparalleled career, Richie took his fans on a spectacular musical journey, performing a variety of his seminal hits. The highly successful residency wrapped in October 2018 after a three-year run.

With his most recent All the Hits, All Night Long Tour, Richie sold out arenas worldwide with a setlist of his brightest and best anthems. In recent years, he also headlined festivals including Bonnaroo, Outside Lands, and Glastonbury, drawing the festival’s biggest crowd ever with more than 200,000 attendees. We’re sure Lionel likes to perform in beautiful Tahoe more than anywhere else, though…

Tickets for all shows are available through ticketmaster.com and through apeconcerts.com. The Lake Tahoe Outdoor Arena at Harvey’s is an all-ages venue.

"Tim and Kristi worked diligently to help us find our Tahoe home. Tim always responded to my phone calls and worked around my schedule to show me homes... continued"
- Paul and Joanne Hadjes
View All